Artesonado is the name for a highly decorative coffered ceiling in Spanish mudéjar architecture, typically of wood or stone. The name comes from the Spanish word 'artesa', a shallow basin used in breadmaking.
- The item represents a crafted wooden ceiling.
- The technique used is the 'artesonado mudejar', that is wood carving.
- The main material used is wood.
- The geographical area is Western Andalusia in Spain, dated around 16th and 17th century.
This video shows a Spanish craftsman explaining different carving wood techniques and this art in particular.
Country:  Andalusia, Spain
[ + info ] 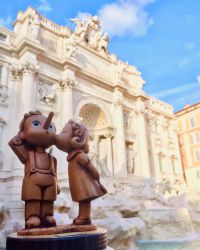 Artistic manufacturing of the wood

The video shows the manufacturing of the wood by the artisan Francesco Bartolucci. The artisan works and shapes the wood from an initial block of wood. All the items have high quality craftsmanship, because they are all entirely handmade and hand-painted.

The Cantabrian albarca is a one-wooden-piece shoe, which has been used especially by the peasantry of Cantabria.

The art of the ‘albarquero’ (albarca’s maker) was an important complementary activity for the traditional workers of the field and the grazing.

Technique: the piece of wood is emptied to build the "house" where the foot will enter. Lastly it is cut decoratively. It requires about 20-30h per piece.

Materials: It is made mainly of chestnut, alder or birch wood.

The wearing of these shoes is first quoted in a 1657 document of King Philip IV. It was used to protect the feet from the water and dirt of the soil when working on agri-food duties. Its "tarugos" or lower heels give elevation to the foot, facilitating agility when walking.
Country:  Cantabria, Spain
[ + info ]

There are different techniques of wood carving. In fact, wood carving is one of the first techniques that have been used to make size works. Currently these techniques are known as ornamentation and are applied to both figures and objects. A sample of carved wooden utensils, from Cortelazor, Huelva
Country:  Spain/Andalusia/Huelva
[ + info ]

Crafts at the service of the latest technology

The inlay is an artisan technique of decoration based on geometric compositions made with inlays of mother-of-pearl, bone and noble woods: one of the signs of the Granada culture, fruit of the Arab legacy in AL-Andalus. Among the materials used are different types of woods such as mahogany, ebony, palo-santo, walnut or those from fruit trees, as well as bone and metal.

These pieces of different materials are glued on a wooden surface until completely covered, which is then polished to its final finish.
Country:  Spain/Andalusia/Granada
[ + info ]

-The shoe tree was used to make shoes in the past, the shoes were custom made and many shoe trees were not useful after a while, so as a by product they were used for decoration. Usually painted and with a lot of creativity they were transformed into new handicrafts, pieces of art. One of those shoe trees was used as a present to all the official guests of the artistic director of European Capital of Culture 2017 in Paphos.

The video shows the realisation of a wooden mushroom-souvenir made by an artisan with ancient instrument. He works and sands the wood, giving the shape of the mushroom.

The video shows the manufacturing of the typical Sardinian Mask, very popular in all the region for its use during the Carnival. The material used for the traditional mask is the wood. The artisans traditionally use pear wood. The incision of the mask is usually made during the winter: the trunk is left to mature away from light and humidity, from 3 to 6 months. Then, the artisans shape and smooth the mask. Finally, the finishing touches are made: the decorative symbols are chosen and the carvings are made. 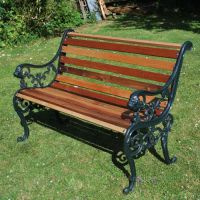 The video shows the realisation of a typical Belgian garden bench by a woodworker. Firstly, he works and sands the wood with precision. Then, he puts together the two pieces of wood with the legs of the bench, which are made with cast-iron. Finally, he varnishes the bench.

Riparian carpentry deals with the construction of wooden boats following traditional techniques. The riparian carpenter is a millenary professional who traces, tills, cuts and assembles on the beach the different pieces that make up the structure of the wooden boats, whose result is not seen until the end. The raw material used is wood and the tools are the traditional ones of the carpentry trade.
The riparian carpentry techniques are in danger of disappearing since a more modern and complex technology is displacing this trade that is not very profitable.
Currently, riparian carpentry has been left only for repairing, maintenance, and construction of small boats, as well as for the construction of replicas of historic ships and reproductions of old boats, such as the 'jábega malagueña', a Mediterranean rowing boat of Phoenician origin.
Country:  Andalusia, Spain
[ + info ]

- The items represented are some wooden boxes decorated with the Taracea technique.
- The main material used is wood as the primary material. You can also find other materials like pearl, tortoiseshell or ivory.
- The geographical area of origin is the city of Granada from the 14th century.
Here you will find a video showing how craftsmen of this artwood create boxes in Granada (Spain).
Country:  Granada, Spain
[ + info ]

The log is peeled and cut into smaller sections then, it is split along the grain.

Splitting along the grain is important because it lets rain water runoff easily.

The oblong form is an archaic classic cut, but other shapes may also be encountered.

Then the wood it is split green and treated with heavy fuel oil to prevent woodworms attack and then let dry outdoor form for 2-3 months.

Then, the  shingles are installed in overlapping rows all over the roof.

Before and during the interwar period, only the nobility, those with historic and social status were privileged to own these gates. The gates were consided to have a cultural role.

Traditional wooden gates are often found at the entrance to towns and other public domains.

The original gates are structured with three pillars used as support for two entrances and a  horizontal upper pillar with shingle roofing cover. The gate has a narrow entrance and a wide gate for large vehicles, farm equipment, loads of hay, horses and oxen.

The details in the design are grand, featuring geometric, zoomorphic, antropomorphic motifs, of which the most commonly found is the rope.

Using wood from local oak trees, craftsman has skillfully carved a wide range of traditional wooden gates, house entrances, columns and verandas. His family have been carrying on this tradition, something many people forget today.

A gate measures about 10 ft tall and the depth of a rope carving is about 2’’. The wood is cut in winter, when it is the driest, then peeled and dried. It is cut at the sawmill.
Country:  Romania/Maramures
[ + info ]

The film shows the process of making a wooden sideboard that is richly hand-decorated in Podhale Style. The author, Marian Stryczula-Masniak, a regional and artistic carpentry teacher from Zakopane (Poland)  was awarded many times in domestic and international craft competitions for his woodworks.
Country:  Poland, Podhale
[ + info ] 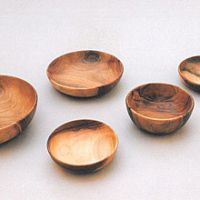 Wood rotation (turning) is a woodworking method, where the product rotates on a lathe called a turntable and the wood is partially removed with the help of chisels. It is a quick, accurate and precise shaping technique that cannot be achieved with other classical woodworking techniques. Weaving tools, kitchen utensils, furniture components and toys were once produced using this technique. Juraj Leporis from the town Prievidza was legendary among the producers working with this technique.

In the video preview is the profile of Eduard Hupka, awarded by the title Master of folk-art production for preserving and developing the metal discharge into wood by wood rotation technique. He produces bowls and candlesticks decorated with brass plating. This master usually chooses, prepares and dries the material himself. He works with dried hardwood, preferring plum, but he also uses walnut, cherry and ash wood. The entire process, from log processing to the finished product takes from four to five years due to long wood maturation.
Country:  The whole Slovak republic, especially the northern regions and Kopaniciarska area of Stara Tura and Nove Mesto nad Vahom
[ + info ]

Woodcarving is a traditional craft where wood is harvested and formed into the desired shape. As the material is used lime-tree, oak, plum, cherry, walnut or pear wood. The basic tools are the knives, chisels, drills and the jack-planes. Motor chainsaws are also used in making of large objects. As a technique, a line cut, rough cut, plastic cut, or inverted cut is used. The surface treatment is done by patination, dyeing, waxing or painting. There are currently around 500 folk woodcarvers in Slovakia. They are dedicated to the creation of sculptures, reliefs, as well as various wooden tools. In their work prevail folk, natural and religious motives. Special attention is given to the mechanical carved bethlehems, the largest of which are located in the municipalities of Rajecka Lesna, Terchova and Horni Lidec. The Czech-Slovak betlehem from the Horni Lidec village has more than 100 carved buildings and 220 figures, out of them 75 also move.

In the video preview the master of folk-art production Milan Stieranka produces a decorated wooden mug. The mug consists of a decorative handle and a mug with a bottom. First, he makes a graphic master of the handle, which he then transfers to the wood. The gross trimming is followed by the cutting of the details. The groove is cut out in the mug, after the mug has been soaked in the hot water, it spreads and the bottom is inserted. Finally, the mug is joined with the handle and it is finished.
Country:  whole Slovakia
[ + info ] 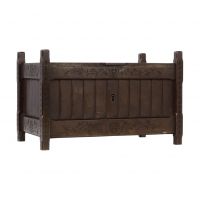 The origins of the Zakopane Style go back to the late 19th century, when the Arts and Crafts Movement was in full bloom. It was created by Stanislaw Witkiewicz, who settled in Zakopane in 1890 for health reasons.

The first Woodcarving School had functioned in this town since 1876, in which professional craftsmen were trained.

The first attempts to use Podhale ornament in artistic crafts involved carving ornament on wooden furniture – chairs, beds, and a screen. In Zakopane the regional architecture movement and its cousin, regional applied art, remains vital to this day. The movie shows the process of creating Zakopane style coffers.