The history of origin dates back to the Neolithic period, around 5700-4400 BC.

Initially, the cloth was used in the natural colours of sheep wool, hemp and linen. Later, the domestic production of patterned linen, hemp, and later cotton fabrics was developed. Especially women were dedicated to this craft.
Weaving is a method of forming a textile in which warp threads are alternately mechanically divided to two or more layers and into a formed slot called” ziva” is embedded attack perpendicular to the warp. By changing the position of the warp threads, a new” ziva” is created and the process is repeated. The way the warp and weft yarns cross, determines the binding of the fabric. In the domestic weaving in Slovakia, the most widespread was the tabby weave, weft rips binding and twill weaves. In these ties there were smooth canvas in the colours of linen, hemp or cotton threads.
Around the mid-20th century, there was an extinction of flax and hemp cultivation, also the change in the way of clothing, led to a reduction in manufacture of home-woven fabrics and factory-made fabrics replaced a large proportion of them. Domestic fabrics have become more of a decorative meaning. They were either interior textiles, or parts of traditional clothing.
Country:  Slovakia
[ + info ]

Basket made of straw in Cyprus

-The making of baskets from straws is a long tradition in cyprus, there are areas where to products are made up to date.

Wooden straws are used to make the baskets that were used in the household and agricaltural activities.

Sometimes the wooden straws were dyed making the baskets more beautiful and exhibiting them in the household as a decoration items. 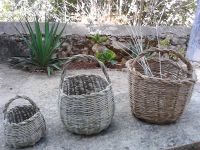 The 'vareta' (twig of olive) is a raw material, used to make traditional baskets as well as more elaborated pieces, and it is a typical Andalusian handicraft, land of olive trees.

Technique. The process of artisanal elaboration is complex and begins in summer with the harvesting of the olive branches, which are cleaned of leaves and classified for the fabric, which consists of placing sixteen pairs of ‘varetas’ in the shape of a star, which are tied and they are surrounded with other finer ones to make the base on which the "ribs" are placed, pairs of ‘varetas’ in the form of a cage that serves as a guide to form the wall of the basket. Once the wall is made, the edge and the handle are made.

Materials: green olive twigs and branches is the main unique material used for this purpose. The olive twig is not usually stored but always work immediately to the collection, after letting it dry for a few days.

These baskets were originally used for the harvesting and transporting of olives and grapes but nowadays have been substituted by mechanical devices. Thus, the creation of baskets with olive branches is in serious risk of extinction because it is not profitable and scarcely survives for traditional reasons.
Country:  Andalusia, Spain
[ + info ]

The technique used is called Caulking
The main material used is oakum.
Caulking is the action of putting oakum on board joints of the decks and then covered with tar, so it avoids water filtration. Caulking needs a different process depending on the type and thickness. When it is "soft" wood, a chisel is introduced among boards until they cause a gap; for hard wood it is necessary to make a bevel to the sides of boards of 2 cm, on the outside.
In the video you will see how is the caulking process on a boat.
Country:  Spain
[ + info ] 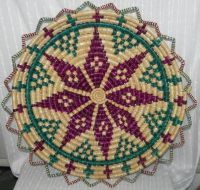 Cesto is a form of tray used in the household. It was used in the house for drying food and for storing it. It is weaven in a special way using straws and fabric and also it is designed in a way to be used as a decoration item.
They are produced up to date using the original material and method, and most of the cestos are considered art items
Country:  Cyprus
[ + info ] 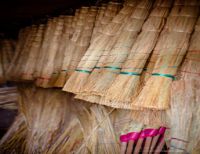 Over time, some Romanian villages gained expertise in traditional broom making craft, a knowledge passed on from generation to generation and still kept among communities of skilled craftsmen. Traditional broom making still thrives in Romanian villages where all locals practice broom craft. It is the village’s second source of income after agriculture.

Broom making starts from growing a special plant – broomcorn (Sorghum bicolor). It is grown as a garden crop and harvested for the long fibrous panicle.

After they thresh out the seeds from the heads, tassels are bundled in preparation for tying. Shorter stalks are used for the inside layers and longer stalks are used for the outside layers to give it a good aspect.
Next comes tying on the broom, an operation which requires a lot of force applied to the broom. He tyes it in four or five places and makes the handle of the broom. 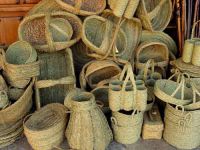 Esparto: a humble vegetable fiber that transforms into the expert hands of the 'esparteros' in beautiful designs of a practical nature.

Traditional craftsmanship that gave shape from esparto and pleita, to tools for farming or house: baskets, carpets, panniers, etc.

Techniques: from country to market, esparto is harvested, dried, cured and braided into different forms. The technique of braiding vegetal fibers is called 'pleita'.

The esparto braiding is spread in all the centre and south of Spain, Andalusia and Castilla, Baleary Islands, as well as Southern regions in other Mediterranean countries. 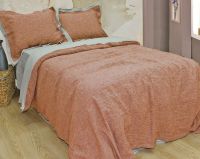 The history of origin goes back to 7th Millennium before Christ, but in Europe it is popular around 18th century and it extended into different parts of Slovakia, typically on the North area, e.g. around Bardejov.

Linen products manufacture is made by breaking the cellulose core to release the flax fibres, removing the coarsest pieces of cellulose, short and brittle fibres and arranging them parallel. Starting with the rough hackle and moving on to a fine hackle, it is important to hackle also the middle. Then tow is saved and spun into coarser yarn. The final products are carpets, shirts, sheets, dresses and so many other things. 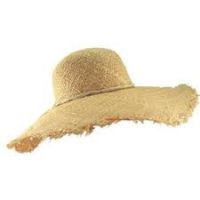 Straw hats were originally used by field workers to protect themselves from sunlight. Usually it was made by girls as a game and by women to contribute to family budget.
They could be made of straw, rafia or “rascello” to create different shapes of hats in various colours.
Marcella Bitossi is an anrtisan in Montelupo Fiorentino who makes straw hats with different types of weavings: smooth, perforated, striped, checkered or rhombus-shaped.
The video shows the manufacturing of straw hats in small and medium enterprises of Fermo, Italy. The hats are made starting from a small braid of straw and then interlaced together.
Country:  Marche, Italy
[ + info ] 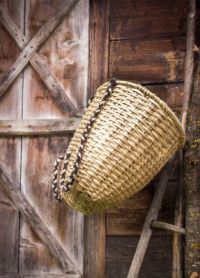 Splitting strips of hazel from a rod, then turn them into ribbons and weave them into traditional frame baskets is almost lost. An ancient art only a few people know about, and even fewer know how to do it.

The artisan dedicates a whole day to gathering  hazel rods and branches and making the strips, a process that starts with putting a notch into the branch with a knife, and making strips while bending the branch to help splitting it easier. Rods can be bent with the aid of his knees, but big branches are harder to bend. He tucks the branch between tree trunk and bend. Just after the bark is removed the strips of wood are tidied up with a blade to smooth the surface.

After ribbons of hazel were made, he finally begins weaving a slat pack basket. It takes him an additional two days to complete the basket. He starts with building a square base in plain weave with very long base stakes. When woven bottom is completed, the sides are built up by continuing to weave narrow strips around the long base stakes, which now became the side stakes, the warp for the side walls. 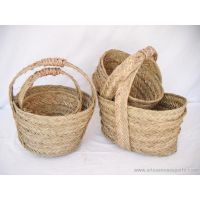 Esparto: a humble vegetable fiber that transforms into the expert hands of the esparteros in beautiful designs of a practical nature. Traditional craftsmanship that gives shape from esparto and pleita, to tools for farming or house. We assist in the Jódar area (Jaén) to the process of making esparto objects, since the fiber is collected in the field until its braiding and final result.
Country:  Spain/Andalusia
[ + info ]

The dried skin of a particular tye of pumpkin was used to make water and wine containers. The particular vegetable fabric is robust and can be used several times without any alterations. It used to be decorated so as to distinguish the owner and became a form of folk art. Nowadays the watercarries are produced for decoration and there are many forms and designs and sold purely as decorative products.
Country:  Cyprus
[ + info ] 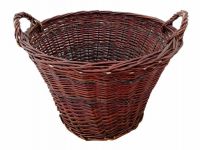 The art of weaving a traditional basket

A film showing how to manually make traditional wicker baskets. The film shows how to trim a wicker, then roll the wicker, break and cut the wicker in the right place and finish the basket . Although wicker has been known to man since the dawn of time, wicker and basketry has developed especially in south-eastern Poland in the 19th century (particularly in the town called Rudnik). Then the wicker schools were created after the Second World War. Apart from the basketry, various decorations and household objects are made of wicker (such as coasters, boxes, baskets, Christmas reeds) as well as furnitures.
Country:  Poland
[ + info ]

The little branches of Gille

The Binche Carnival is the most famous carnival event in Belgium. There is evidence of Binche Carnival since 1395, when people used to meet around a bonfire the day of Marti Gras to celebrate the winter’s end, but the Carnival as we know it today goes back to 1500.

The traditional character is the “Gille”, a peasant mask, worn by everyone in Marti Gras and that costume is totally handmade.

The video shows the creation of the little branches that are part of the costume of Gille. The artisan in the video explains that he first decides which branches he wants to use. Then, he puts together the branches in order to form a little bunch. The artisan explain that the branches are an essential accessory for the character of Gille. 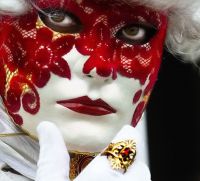 Venetian Masks are handmade and made of papier-mache or  gypsum according to the ancient venetian artisan tradition from 1300. As in the past, after resting for at least 24 hours, the masks are decorated with different materials as ribbon, stones and gems. In origin masks were used not only at Carnival parties but also during the rest of the year. They were an effective way to remove all kind of social diversities, so everyone could act without judgment. Over the years wearing masks in Venice has been relegated at Mardi Gras and today it represents a traditional symbol for the city.
Artisans create masks to wear and as collectibles, the difference between them is in the durability: collector’s masks are more heavy and they are processed to last over time.
In Venice there are shops which still produce handmade traditional masks, some examples are “Atelier Marega” and “Gli Amici di Pierrot”.
Country:  Venice, Italy
[ + info ] 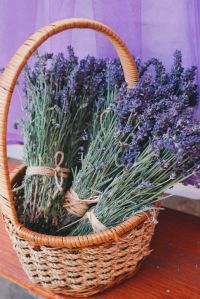 The item is a wicker basket.
The technique used is the wicker weaving technique.
Material used is usually woven fiber made of plants and water.
It is one of the oldest craft tradition and this crafter has helped convert it in a beautiful craftmanship.
This basket has been made in Guadalajara (Spain) where Antonio Martínez Ruiz has his own wicker craft business. He has also founded a workroom-school.
The video shows how baskets are made.
Country:  Spain
[ + info ]